When investing in a CCTV solution you are presented with an almost overwhelming number of choices. However, the real consideration will be whether to invest in an Analogue or IP CCTV camera.

In this blog we explore the attributes and limitations of both types of camera to allow you to question your current CCTV solutions, or to help in the consideration of a new installation.

Analogue Camera Overview
An Analogue surveillance camera is fitted with a CCD (charge-coupled device) sensor that digitizes the light that falls on its surface capturing the image for processing. Before transmission of the video, the image has to be converted back to an analogue signal so that it can be viewed on video monitor or recorder. Analogue cameras must be NTSC/PAL (named after National Television System Committee /Phase Alternating Line) compliant and are limited to a maximum resolution that is equivalent of 0.3 megapixels.

Analogue CCTV systems transmit video over coax or UTP (unshielded twisted pair) cabling to a digital video recorder (DVR). At this point the video is digitized and stored. Most modern DVRs have network capabilities giving the user the option to access the feed remotely from a local area network and with the proper configuration, from across a wide area network or over the internet. The benefit of a local area network set-up is that there are no videotapes to change; instead the video is stored on hard drives or a networked drive typically on a FIFO (first-on, first-off) basis so that there is always a rolling video archive over a user defined number of days. 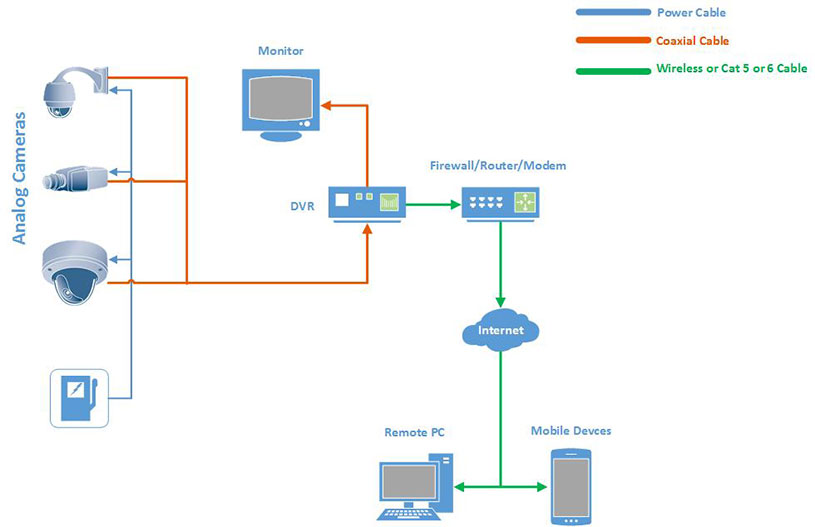 IP Camera Overview
“IP” stands for Internet Protocol which is the low-level programming language used to transmit data between computers in your home and the internet. This means that an IP camera is like a little computer that you connect to, to access your video and as such you do not require a direct connection to a PC to operate meaning they can be placed anywhere within a network and accessed remotely at any time.

Consequently they do not require a DVR; instead they operate with an NVR (network video recorder), which in most cases is just software that runs on a computer or server as it doesn’t need to convert analogue video to digital. The video footage can then be stored on new or existing network RAID (redundant array of independent disks) drives as directed by the NVR software.

In contrast to an Analogue camera, an IP camera excels in capturing high definition, megapixel images as captured data is digitised directly from the sensor. And, because of their increased computing power they can perform more advanced functions such as detecting motion to trigger recording or tampering and act on it by emailing, uploading or recording images or video to an internal storage card external storage device. 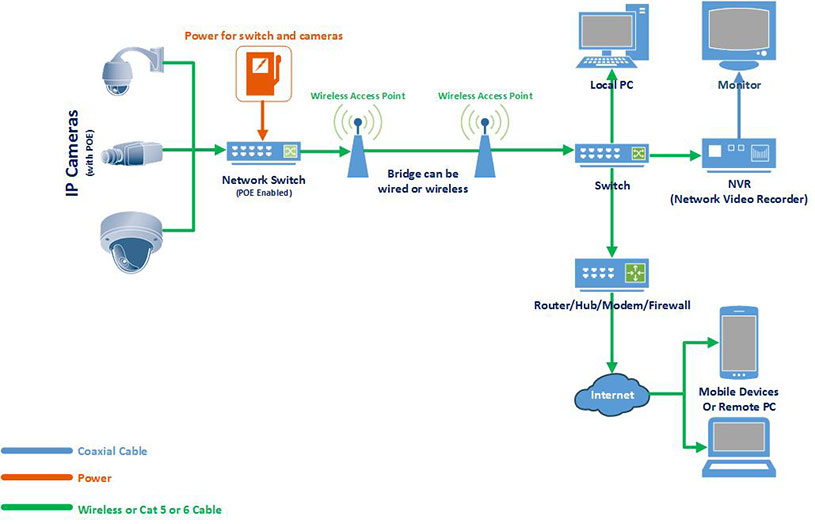 The Advanced Capability of IP Cameras
IP cameras are more advanced than the traditional ‘plug-in and play’ capability of Analogue cameras and as such, do have certain advantages which we have summarised into the four main sections below:

Why analogue and IP both matter
As with the emergence of any new technology there is always a process of adoption and adaptation. At GBSG we will still recommend Analogue cameras if we feel that they are adequate enough to fulfil a clients’ security needs.

For an impartial look at IP cameras v Analogue cameras we have produced the table below to compare the attributes and limitations of both:

Does your company use the services of security guards?